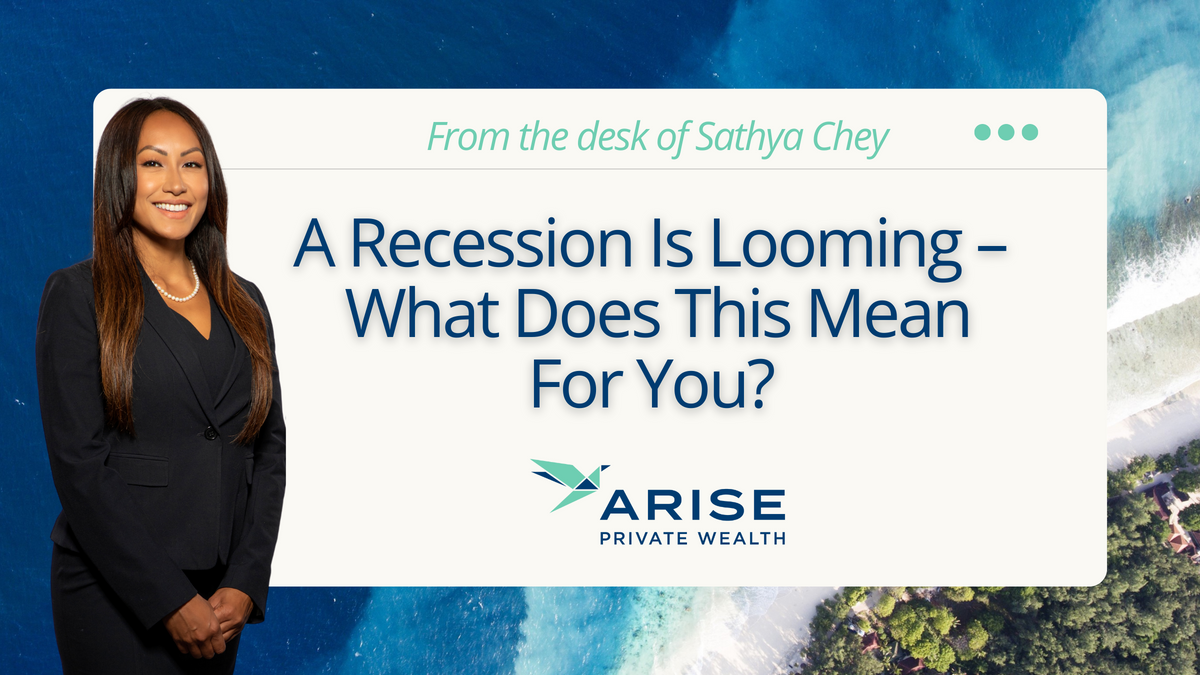 A Recession Is Looming – What Does This Mean For You?

You may have heard the expression that “a recession is when you have two consecutive quarters of falling gross domestic product (GDP),” but labeling a recession is much more nuanced than that. First, despite all the noise the media makes, there is only one official group that determines recessions – The National Bureau of Economic Research (NBER) Business Cycle Dating Committee. This group reviews multiple determinants of a recession, which not only include declining GDP, but also the unemployment rate, consumer and business spending, manufacturing production, and income. Therefore, although we saw a dramatic decline in GDP in the first quarter of 2022, and a much more modest, but decline nonetheless in the second quarter, it does not mean we are in a recession at this time. We still have low unemployment and positive growth in wages, spending, and manufacturing. It is yet to be seen whether the NBER will declare we are in a recession, which is always done when we are well into the recession or past it!

Recessions occur for various reasons, like the asset bubble in housing in 2008, too much inflation, or a sudden economic shock like the pandemic, which has caused shut downs world wide and impacted the production of goods. In the economy today, we are dealing with the impact of $4.5 trillion dollars in spending by the government to limit the impact of Covid, low interest rates that made borrowing cheap, and break down in supply chains from shutdowns, causing goods to either cost more to produce or supply to fall. All these factors cause inflation to rise, which when exacerbated too rapidly, can push us into a recession.

However, we may be able to learn some lessons from the “Great Recession.” The Great Recession refers to the period between December 2007 and June 2009 where real gross domestic product fell over 4% from its peak and the unemployment rate briefly touched 10%. It was a trying time that impacted many Americans and also the stock market, spurring many new policies that helped the economy recover, while preventing events that led to the recession from happening again. There is much debate on how the recession could have been prevented and how it was handled, but one thing is clear – it made Americans take a hard look at their savings and habits around spending. Some lessons we learned were:

Tip 1:  The importance of having a cash reserve.

Needing to liquidate your investment portfolio during a stock market correction is extremely detrimental, as you are losing your ability to recover your losses during the subsequent recovery. Having a cash reserve of 3-6 months while working and as much as 12-18 months during retirement is integral to having the flexibility to avoid selling your investments at an inopportune time. You can’t always plan for a roof leak or other emergency, but you can make sure you have the cash needed for the expense and not have to rely on a volatile investment portfolio or creating debt to pay for it.

Many investors tried to “get out” or sell their investments for cash while the stock market had already fallen significantly or else tried to time when the “right time” was to get back into the market. This causes two dilemmas: 1) Locking in your losses and potentially missing out on the market rebound 2) Stress and anxiety about when to get back in. In a 2021 study done by Charles Schwab on market timing, it was found that an investor with perfect timing (investing at the lowest point) had incremental results over the investor who invested immediately.

Tip 3:  Take advantage of the volatility.

If you’re adding money to your investment portfolio, you should welcome the volatility. You are buying stocks on sale! One of Warren Buffet’s most famous quotes reminds us of this: “We simply attempt to be fearful when others are greedy and to be greedy only when others are fearful."

Many soon to be retirees were caught off guard when they suffered severe losses to their investments during the Great Recession. It was likely because they had not reviewed their investment allocation to make sure they were aware of the amount of risk (stock exposure or high-risk investments) they had. When the stock market was doing well in the years preceding the Great Recession, many investor portfolios became unintentionally higher risk as the value of the stocks grew relative to the total size of the portfolio. It is important you review your investment allocation at least annually to rebalance it to intended targets or at least be aware of the amount of risk you are exposed to.

Tip 5:  The value of working with a Financial Advisor.

I was able to provide so much comfort to my clients in either talking them through their concerns or reassuring them that our careful planning meant this momentary decline did not have an impact on their retirement. That relief is priceless! Having a Financial Advisor who can help you make decisions from a research and fact-based perspective can really prevent you from making emotional decisions that could have a long-term impact on your retirement. Many people are hesitant to hire a Financial Advisor because of the cost, yet wouldn’t dream of doing their own plumbing or electrical. Similarly, taking a “DIY approach” to your retirement can also have severe consequences.

Sathya Chey is a registered representative with, and securities and advisory services are offered through LPL Financial, a registered investment advisor. Member FINRA/SIPC.

Content in this material is for general information only and not intended to provide specific advice or recommendations for any individual. All performance referenced is historical and is no guarantee of future results. All indices are unmanaged and may not be invested into directly.

The opinions voiced in this material are for general information only and are not intended to provide specific advice or recommendations for any individual. All performance referenced is historical and is no guarantee of future results. All indices are unmanaged and may not be invested into directly.